Back in 2006, long before 3D TV Without Glasses, electrical brands buzzed with excitement as Sony, LG and Panasonic unveiled their 3D TVs to the public. Even at a high price, consumers stopped to think about how the TV would tech up the lounge entertainment. All brilliant, yes.

Well, No. And let’s look at the two avenues for 3D entertainment: the cinema, and the home TV system.

The enormous price of the flat screen 3D TVs coupled with an extreme lack of content meant it was not a slow burner – it failed to light much at all.

Why? It is not about the TVs, it is about the reason we stare goggle eyed at the TV: the entertainment from movies. Not many film companies wanted to jump on the 3D bandwagon. Apart from the elevated costs of 3D enabled cams, editing and shooting, distribution costs soared through the roof.

But the problem did not start with home entertainment. Before people considered buying 3D TVs then crossed that item off the already expensive Xmas list, the actual issue started on the big screen. At the inception, cinemas were slow to enable a 3D only viewing screen. Even iMax took its time.

Then the films came, and we were hit by a deluge of 3D movies from animation to blockbuster scifi epics. Next problem, the costs for a family of 4 for example. The 3D ticket price stung like a pollen deprived bee. The ticket prices. Oh boy, how exactly do we allow people to watch a movie and not have to save up for a whole season to be able to do it again.

Spiderman wanted to take the 3D angle and were fortunate enough not to make losses. But Dredd on the other hand took a slice off its net profit when 3D viewings plummeted. 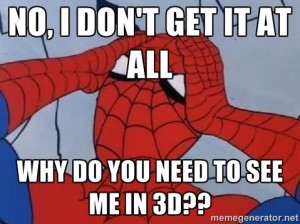 And this came with an added distraction. One which puts folks off 3D on home TV systems or at the cinema. What is this uncomfortable plastic object resting on the bridge of my nose?

Whether used to wearing glasses or not, it becomes an encumbering accessory sitting on a couch hoping for something to jump from the movie’s limited 3D budget. Not a fan of these even when they fit well which can’t be said for most glasses available. At the cinema, there is a bigger bugbear which seeks to empty wallets at a faster rate, the extra cost for families – the glasses too carry a fee as you clasp your ticket to 3D wonderland.

Seems Sky 3D may be pulled, as matters get worse, and even the high cost of 4K Ultra HD TVs are working against continued drops in 3D TV sales. Seems a more passive approach works as opposed to a 3D TV for the home. These bad boys may even be the first to offer 3D TV Without Glasses for the couch potato of today. And you can watch your favourite 3D blu-ray movies on your sharper imaged 4K UHD TV. To quote from Tech Radar on watching 3D on a UHD as opposed to a 3D TV:

In many ways, passive 3D offers a more comfortable way of watching a 3D picture compared to active 3D. But because the light is split, 3D Blu-rays effectively have their resolution halved. It’s much worse when watching a broadcasted 720p sports match – the picture ends up not even being HD. 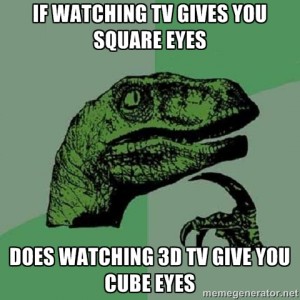 Over the last few years, 3D screens in cinemas have been blessed, thankfully, with more content i.e. movies with actual 3D running time. Budgets are higher but if 2015 is to say anything for 3D in the movies, it will be due to the spate of big budget films this year including Jurassic World, Terminator: Genesys, and Star Wars The Force Awakens.

There is another growing use for 3d TVs since clearly their best asset sits with how they display information and capture the interest of an audience. Some may say that sounds gimmicky yet businesses are recognising the power of displaying a 3D TV stand to showcase their line of work. And with 3D TVs without glasses, no need for discomfort from badly fitting frames. 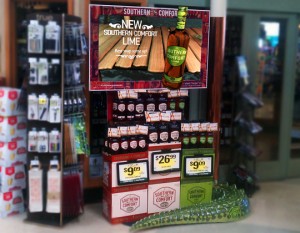 This is where Techno Snowball enters the 3D foray. The 3D TVs do not need 3D glasses to be issued, just walk past a screen and watch the floating 3D models move towards you. For example, at corporate trade shows, a business can outshine competitor products with a 3D TV that shoots their brand off the screen and stops consumers in their tracks. The eye catching appeal is no longer just a fiction gimmick, it now becomes a force of nature in sales, bolstering a brand’s ability to convey its message and hold the attention of a viewer. 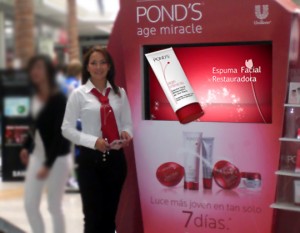 There is an avenue for 3D displays within brand marketing, one able to capture interest at events in a way unmatched by other devices. The key is the wow factor, no glasses required to view objects in 3D space.

Taking just one example, what are you more likely to remember at an event if looking for a new smartphone: the displays showing the smartphones on flat screens, or the 3D displays with floating smartphones that dance around the screen?

Hmmm. Worth some thought.